Inspired by the traditions of Quebec, Newfoundland, Ireland, France and Scandinavia,
Nightingale created an unmistakable sound of power and beauty. 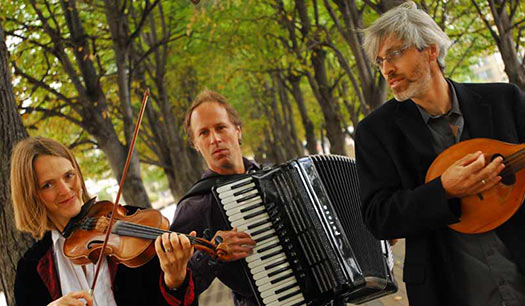 For 18 years, Nightingale performed a mix of traditional and tradition-inspired original music for concerts and dances throughout the US and abroad. With Becky Tracy (fiddle), Jeremiah McLane (accordion and piano) and Keith Murphy (guitar, mandolin, foot percussion and vocals), the band created a distinctive sound using French Canadian, Irish and many other sources as the basis of sophisticated and emotionally compelling arrangements.

The band retired in 2011. Some Nightingale CDs are now available on this web site.

All three musicians continue with various other musical projects. 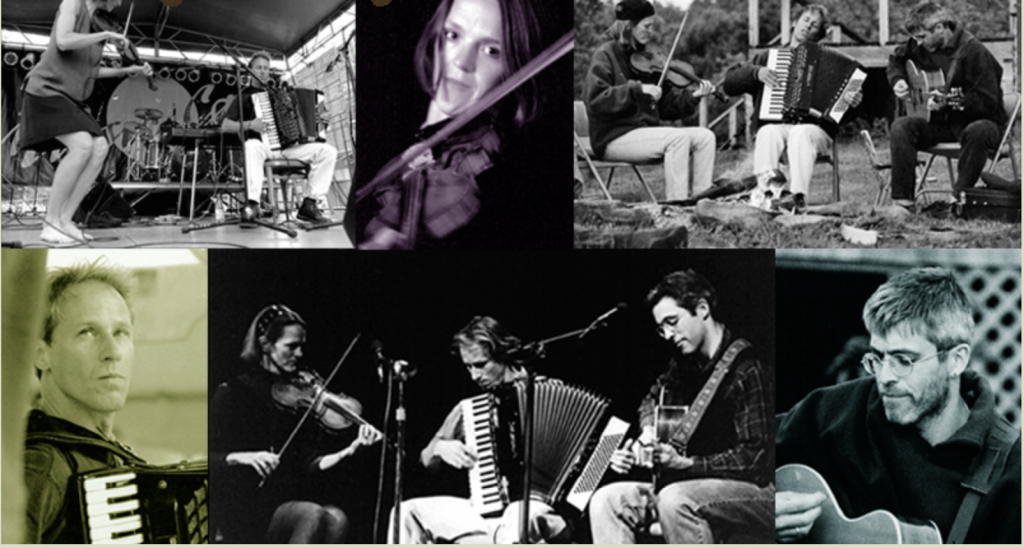 Nightingale was formed in 1993 by Jeremiah McLane (accordion, piano), Keith Murphy (voice, guitar, mandolin, piano, foot percussion), and Becky Tracy (fiddle). The nightingale bird is a poetic figure that appears in traditional songs from many places including parts of Northern Europe, Canada and the United States. So the nightingale was an appropriate emblem for a band commited to drawing inspiration from a wide musical territory that includes Ireland, France, Scandinavia, Newfoundland and Quebec.

McLane, Murphy and Tracy were all established players in the traditional New England contra dance scene when they met and Nightingale quickly became a highly sought after New England dance band. But from its inception, Nightingale explored music outside the bounds of New England contra dance and could never be pigeon holed as simply a dance band. Songs of Quebec and Newfoundland were a staple of their repertoire and in their concerts they stretched the format of traditional dance music. Still, their experience as dance musicians generated an obsession with rhythmic integrity and the sustaining pulse that is the essence of dance music. The listener could never miss the underlying drive of much of Nightingale’s music.

The band’s first recording, The Coming Dawn was made in 1994, barely a year after the band’s formation. It was produced by Pete Sutherland and it captured the fresh, raw energy of the band as well as establishing Nightingale’s sophistication as players and arrangers of an eclectic mix of traditional music.

Less than two years later, the band took on a more ambitious recording project – Sometimes When the Moon is High, produced by Grey Larsen. The album was  recorded in Joliette Quebec at the (just newly finished) studio of La Bottine Souriante pianist, Denis Frechette. More musically complex and more tightly arranged, this album won the band cudos from a wider audience.

Throughout this period, Nightingale travelled extensively playing concerts and dance events  around the U.S. and also in Canada, the U.K., France and Denmark.

But eventually, after six years of intensive touring, the band needed a break, some rejuvenation and time to consider the group’s next phase. In 1999 the band began a nine month sabatical during which all three players explored other musical projects. In 2000, Nightingale reconvened and began reworking its repertoire, drawing more extensively on original compositions from band members Jeremiah McLane and Keith Murphy.These compositions frequently synthesize elements of the band’s  traditional repertoire with subtle references to contemporary music. With this new repertoire, the group’s sound and energy also evolved, once again proving the creative resourcefulness of the band.

This work culminated in Nightingale’s third recording – Three, released in June 2004. The CD was produced by Denis Frechette of La Bottine Souriante and recorded in Brattleboro, VT. It reflected Nightingale’s past while also breaking new ground.

Around that time, Nightingale performed on CBC radio in Canada and was  chosen for the Meet the Composer series in Saranac, New York. The band continued to perform at festivals, performing arts centers, folk clubs, and major dance events everywhere

Nightingale returned to Joliette, Quebec in 2009 to record their fourth and last album, Jolie. On one level, the band covered all their usual bases – songs in English and French, instrumentals ranging from delicate to the heights of dance energy. But the trio continued to find new layers of rhythmic and harmonic counterpoints, extending their musical boundaries even in this last project.

Becky, Jeremiah and Keith each continue to be highly active and influential in the world of traditional music both as teachers and performers. 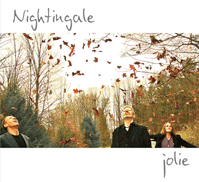