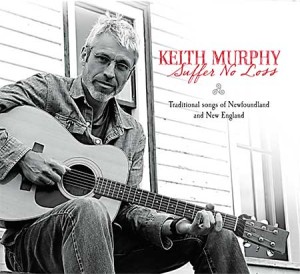 Reviewed by Devon Leger for Kithfolk:

New England guitarist Keith Murphy is well known in East Coast folk circles for his work with the band Nightingale. A trio featuring Murphy, fiddler Becky Tracy and accordionist Jeremiah McLane, Nightingale are known for their beautiful and thoughtfully arranged traditional songs and tunes and have ties to the historic New England contradance community. With his new solo album, Keith Murphy pays homage to his New England roots, but also to his native roots in Newfoundland, where he’s from. His cover here of “Great Big Sea” (from which the famous Newfoundland band takes their name) is absolutely suburb and totally redefines the song.

As a whole this album is a very stripped back affair, really just Murphy and his guitar. But what a guitarist! And what a singer! You don’t really need much more when the talent level is this high. Murphy’s guitar rings out clear as a bell and his inventive and intelligent playing is on fine display. As a singer, I love his slightly rough-edged but totally on-point vocals and there’s even a kind of humbleness to this album that makes it really endearing. It’s almost like he’s happy to just sit down in front of a nice microphone to share some of his favorite songs.

The songs themselves are drawn from Newfoundland sources like “Lukey’s Boat” and “Let Me Fish off Cape St Mary’s” as well as from collections of Southern Vermont singers, which yields songs like the old ballad “Fair Mary” or “Winsconsin Emigrant.” It’s been a long time since I heard a solo album that sounded so vibrant. Pick this one up if you have any interest in North American folk music.